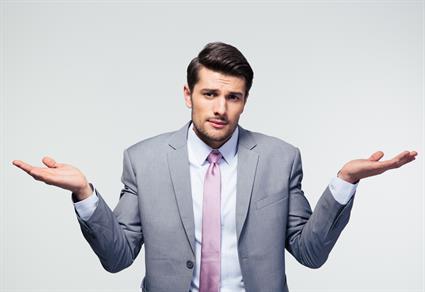 Business discussions can be packed full of clichés, acronyms and buzzwords which may baffle newcomers. In this article, Nicky Tatley attempts to decipher some of the most common jargon used by men and women who shake hands in front of big graphs.

Ten years ago B2B (business-to-business) and B2C (business-to-customer) were the buzzwords in business marketing.

These terms represented a corporate mindset that considered the brand of a business to be owned and controlled internally.

Marketing success was considered to be dependent on a conceived difference between how businesses made purchase decisions and how ‘Joe Public’ consumers buy. However, the global explosion of social media over the last decade has blurred the lines between B2B and B2C and allowed the concept of P2P (peer-to-peer) marketing take over.

Now, with information at all of our fingertips at every waking moment, we (whether CEO or stay-at-home mum) reward relevance, personalisation and customer satisfaction with our custom. We are all consumers – we read reviews, talk to friends, tweet and post on Facebook - and so business marketers now need to foster a personal interaction with every customer on and from these platforms.

To successfully market your brand today, you need to join the new and improved ‘circle of trust’. Nothing hippified, or anything to do with Robert de Niro - just people, talking to people.

This phrase pops up constantly in business speak and is one of those slightly irritating terms (like ‘core competence’ or ‘leverage’) that have definite delusions of grandeur.

‘Due diligence’ basically means ‘checking it out’ or 'doing your homework': the process of your investigation of a business or person prior to the signing a contract

Sometimes required legally, though usually a voluntary exercise ‘due diligence’ is most often the process a buyer goes through in evaluating a company for acquisition. Its nature is of careful, systematic research which should make the costs, risks and benefits of the deal wholly transparent.

Perhaps the suggestion of a finer toothcomb being used was the intention of whoever coined the phrase. Not something that can be exactly quantifiable – exactly how much diligence is due, one might ask – there is a whiff of silliness about this commonly used term.

The key to understanding the core nature of this common business term lies in its semantic roots. Derived from the French word ‘franc’ – the name of the currency, of course, but also meaning ‘free’ – a franchise is indeed a more liberated alternative to a chain of businesses.

Once a successful business has been established, a proprietor can then become a franchisor and, for a fee, allow other individuals - franchisees - to use the same business model, brand and distribute the same service.

The franchisor doesn’t have the encumbrance and liability of managing a chain of businesses, but her/his success depends directly on the success of the franchisee. The beauty of this arrangement lies in the incentive the franchisee has to succeed (compared to a regular employee) as they have a direct stake in the business. Capitalism at its best.

Now thrown into conversations in all aspects of business, the idea of the USP (Unique Selling Point) first arose in the 1940s to explain the effectiveness of a series of advertising campaigns. Rosser Reeves – a pioneer in TV advertising at the time – came up with the term to describe campaigns that had a unique proposition for the customer and thus convinced them to switch brands.

Summing up the now golden rule of marketing, that differentiation from rival brands must be strategically promoted, the USP’s defining factor is singularity. ‘Each advertisement must make a proposition to the consumer—not just words, product puffery, or show-window advertising.

Each advertisement must say to each reader: "Buy this product, for this specific benefit”’ states Reeves in his book Reality in Advertising. USP is now a standard business term, used to refer to any aspect of an object or process that makes it stand out from the crowd.

There can’t be too many true angels working in business today. It just doesn’t go with the territory. You’ll probably find them at an NGO or in a nurse’s uniform, but a business angel does have an altruistic side, and yes – they really do exist.

The classification of ‘angel’ began on Broadway and was used to describe wealthy types who donated money for theatre productions. From the late 1970s investors who supported entrepreneurs were also given this label, and now they are an integral part of the business sky-line – providing capital for companies, usually in exchange for convertible debt or ownership equity.

There are now even ‘angel networks’ who pool their capital and share research, as well as offering advice to their portfolio companies. Recent years have seen many celebrities becoming investment angels, with the likes of Will.i.am, Ashton Kutcher, Lady Gaga and Justin Bieber all donating funds to inspiring tech companies.

Sustainable Return on Investment or SROI is a term used to describe the initiatives that will help a business achieve its long-term goals in all areas. It is a methodology that clarifies the true value of a business project by placing monetary value to all of the costs and benefits – be they financial, social or environmental.

Unlike traditional economic assessments (which look at standard cash-flow issues and the basic ROI), SROI will look at factors such as greenhouse gas emissions, public health and safety or social responsibility and work out what a business can realistically achieve in these areas in order to strengthen their business profile. The aim of successful SROI is to present a transparent case for project approval and/or funding.

This is basically the ultimate dream of any business. If a company hits exponential growth (think Facebook, Microsoft, Ebay, Starbucks…) its proprietor can start rubbing their hands in glee, in preparation for world domination.

Defined as an increase in number or size, at a constantly growing rate, it is a term that is used in biology (population growth, micro-organisms), physics (nuclear chain reactions), economics (GDP) computer technology (processing power and internet traffic) and finance (compound interest).

Exponential growth is, however, a finite process so - if your business does happen to find itself on this upward trajectory, in its profits and output - enjoy the ride while you can.

If you’ve Skyped the kids whilst away on a business trip, then you’ve dabbled in the rapidly growing world of VoIP. Voice over Internet Protocol does what it says on the tin – it is a group of technologies created for the delivery of voice communication (and multimedia sessions) over Internet Protocol (IP) networks.

Instead of using the standard phone networks, VoIP provides communication services such as voice calls, SMS, fax and voice-mail over the public internet. In its earliest incarnation, providers offered business-models similar to traditional phone networks. Then came Skype which built closed networks for private users – its selling point being free calls and user-friendliness (it is now catering to businesses – offering free calls to those signed up to its network).

Third generation providers such as Google Talk have progressed things further by creating solutions which allow not only straight calls, but dynamic interconnection between users on any two internet domains. Many businesses are now migrating to VoIP because of its bandwidth efficiency and low costs.

Solutions that are aimed at businesses are offering a unified service which means all communications – calls, faxes, voice-mails, emails, conference calls can be delivered via any receptor – including mobile phones. With all this running over a single network, the savings for businesses are obvious.

In these recent times of financial uncertainty, with banks withdrawing their lending hands and keeping them firmly behind their backs, seller financing has come into its own. Basically money lent to the buyer of a business by its owner, seller finance usually has terms similar to that of bank loan.

As with any bank-financed purchase, the buyer will probably pay a down payment, clearing the rest in installments, in an agreed time-frame. To keep things above-board, a legally binding purchase agreement will need to be drawn up by an attorney and signed by both parties.

This financing method is certainly a more civilised route than going cap in hand to the bank manager and it is reliant on a greater level of mutual confidence. The fact that the seller is willing to stake the receipt of the asking price on the future success of the business, shows that they have real faith in the buyer, and this in turn will be an incentive to the buyer to pay a higher price and interest rate.

If we go back to the roots of this term, its meaning becomes self-explanatory. The word hedge has been used as a verb in the English language since at least Shakespeare’s time. Meaning to ‘equivocate’ or ‘avoid commitment’, it is seen in The Merry Wives of Windsor,

‘I myself sometimes, leaving the fear of God on the left hand and hiding mine honour in my necessity, am fain to shuffle, to hedge and to lurch.’

The phrase ‘hedging ones’s bets’ came later in the Sixteenth century, and verb was originally derived from the noun hedge. To hedge a piece of land was to limit it in size – hence its later meaning in terms of business: a secure and limited risk.

So, a hedge fund is just that; by using a range of investment techniques and by investing in a varied array of assets, it aims to generate a higher return in relation to risk than normal investments. Often, hedge funds are managed to generate a consistent level of return, regardless of what the market does. A hedge fund manager will act on behalf of investors and will look for ways to eliminate some risks while taking on others with an expected good return. It’s not an easy task, hence the fat paycheck for some of these expert ‘hedgers’.

If you enjoyed this article, sign up for a *free* BusinessesForSale.com account to receive the latest small business advice, features, videos and listings directly to your inbox!